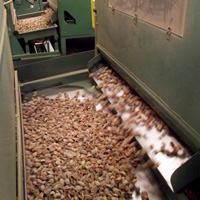 We have almost finished processing the nonpareil.  This is much later than first planned as many growers have much larger crops than first estimated.  Such a good problem to have!  Some of the nonpareils have come through as large and flat this year, while others are plump and pale.  There has been some dehydration required for kernels, however it is the damp hulls that have caused delays in the huller.  Wet hulls just don’t like coming off easily and this slows our whole process down. Overall though the nonpareils look to be of good quality this year.